Have you seen Pattern Anthology's new fall collection?  It's called the Alphabet Collection and has some pretty cool mix and match separates.  I was lucky enough to test the W pants, designed by Melissa Mora of Blank Slates Patterns and Melly Sews.

I was asked to make the size 5 shorts option.  Unfortunately, they ended up being too big on S, but we have a neighbor that was able to fit into them. 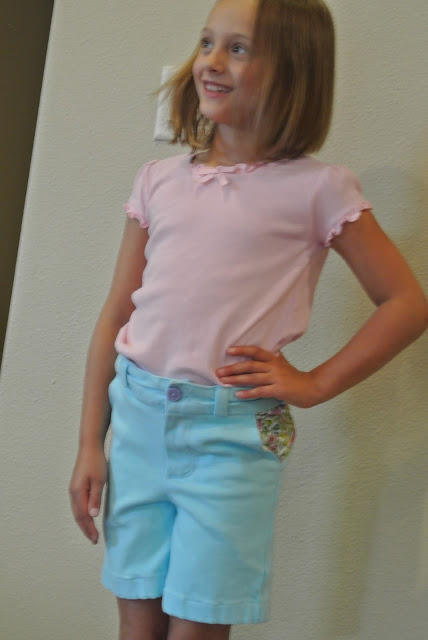 That's a working zipped fly there.  My first.  It takes a little bit of effort, but Melissa explains it pretty well. 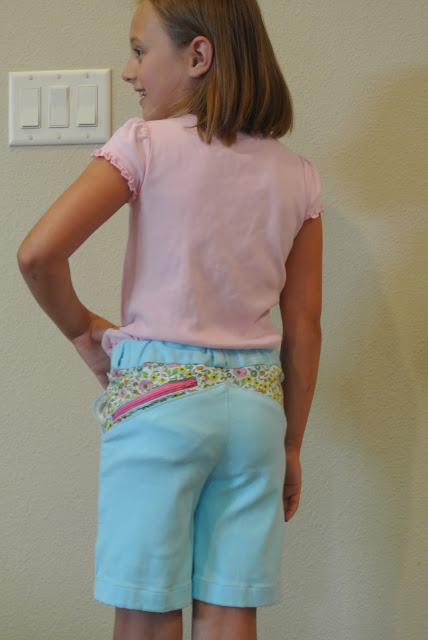 And this is the reason these pants are called the W pants.  The pattern has options for 1 or 2 zip pockets, or welt pockets in the back. 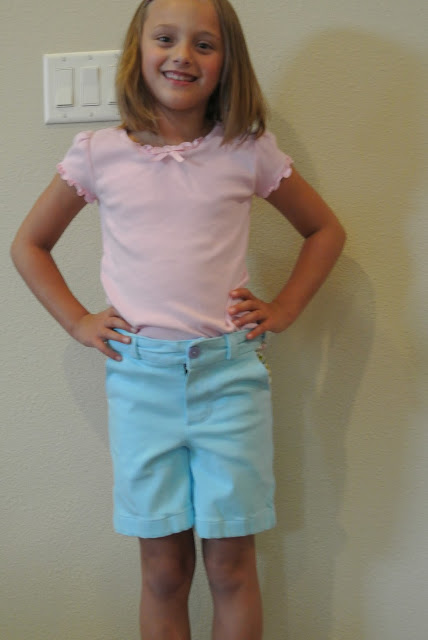 I love these shorts.  I'm planning on making a pair of the pants for S pretty soon.

The Alphabet Collection is only available for the next couple of weeks at a discounted price and includes all four pieces.     Besides the W pants, the collection includes a jacket, a raglan tee, and a vest.

And thanks to our sweet, goofy, neighbor girl for modeling.
Posted by trinh at 9:33 PM 3 comments:

The last day of  the first ever summer KCW snuck up on me.  There's big changes with this season's KCW, a new interactive website, which I tried out for the first time today, and 2 additional seasonal challenges.  I'm not really sure if the old Elsie Marley flickr pool is still in use or not, but I kinda miss the blog links on people's projects.  Hopefully this feature will be added with the next challeng.

So anyway, I was pretty busy with a couple of selfish sewing projects, but I did manage to complete 2 items for S.  First up is the Origami Skirt by a new designer, Rabbit Rabbit Creations. 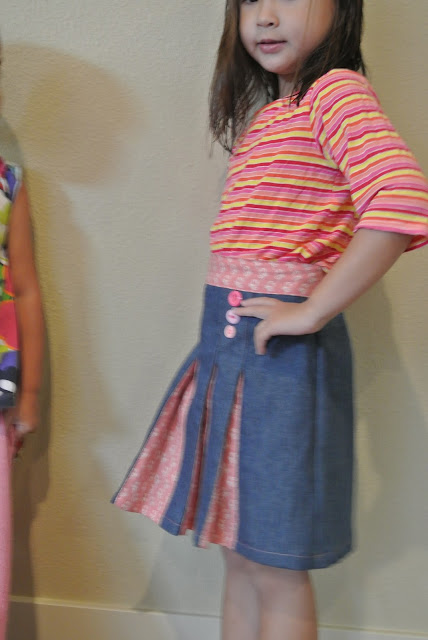 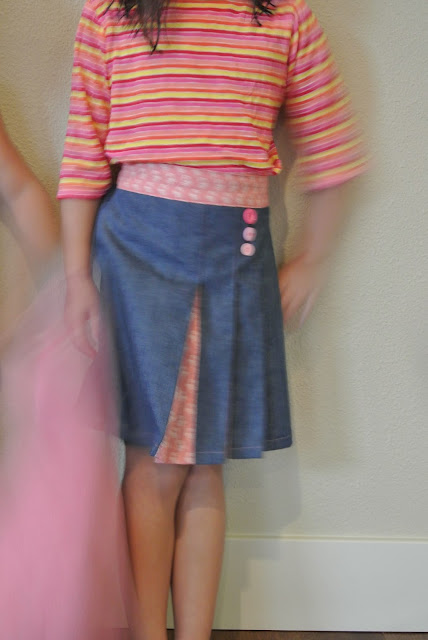 I absolutely love this skirt, so much so that I made the adult version for myself, in exactly the same fabric and everything, but more on that later.   It's a pretty simple A-line skirt with a flat front and elasticized back.  The peek-a-boo pleats just off center, though, is what makes this skirt truly unique.
So onto my next project: the Nelle Dress by Brownie-Goose.  This was my first Brownie-Goose pattern, and let me tell you, it will not be my last.  I loved the simplicity of this little dress. 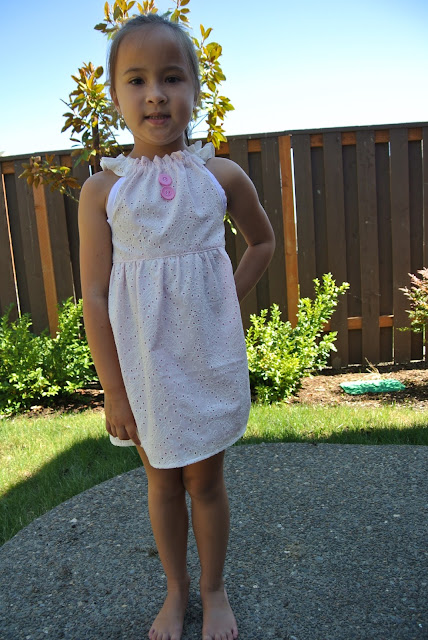 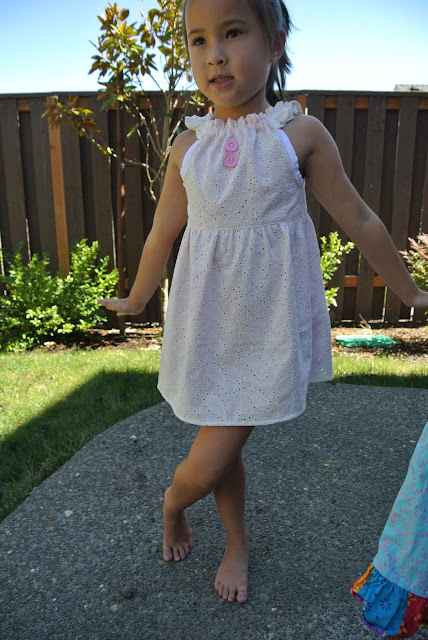 So that's it for Summer 2013 KCW!  Now to explore the website some more and see what other people have posted.
Posted by trinh at 5:17 PM 2 comments:

Some Midnight Sewing and Go To Carousel Shirt 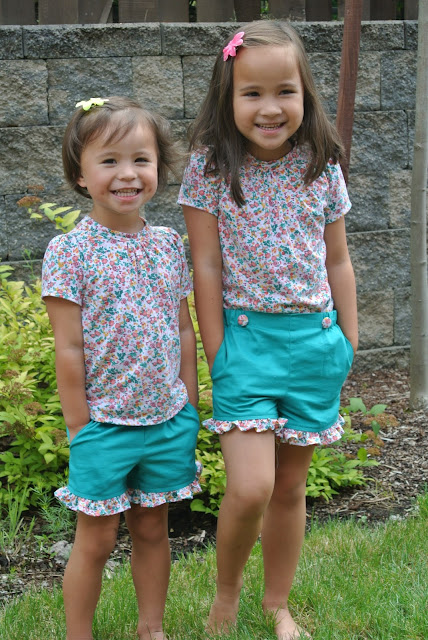 Most of my sewing happens after 8pm at night, when the kids are in bed and the house is quiet.  I love those hours to myself, and they often last after midnight so that I can complete a project and leave it on the stairwell next to the girls' room for them to find the next morning.  It's a nice surprise for them to discover something new.

Sometimes though, the late hours result in silly mistakes that I don't discover till the next day.  Take the shirts pictured above.  The pattern is the Go To Carousel Shirt, part of the Pattern Anthology bundle that was released in the spring.  When I went to try on the shirts on the girls the next morning, I noticed that S's shirt seemed to be almost the same size as B's.  I chalked it up as the fault of the pattern because, in my experience, a lot of patterns seem to run short on the torso.  But as the day wore on, it became more puzzling to me that a size 5 would look exactly the same as the size 3.  I was pretty sure that I had cut the right sizes and not the same size twice.  Then I checked both shirts against the pattern just to make sure and they seemed fine.  As I mulled over the situation, it occurred to me that I must have sewn the size 5 front onto the size 3 back and vise-versa, and this was the reason why both shirts seemed to be the same size.

So because S's shirt is so short, I decided to make a peplum that didn't turn out so well.  I might have to cut it off and start over with a new peplum, or she might have to tuck her shirt in.  I do love these little shirts though, especially the high neck and the gathers, and the keyhole in the back is a really cute detail. 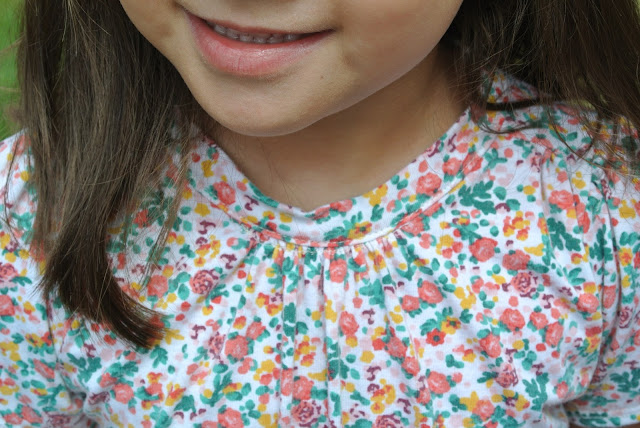 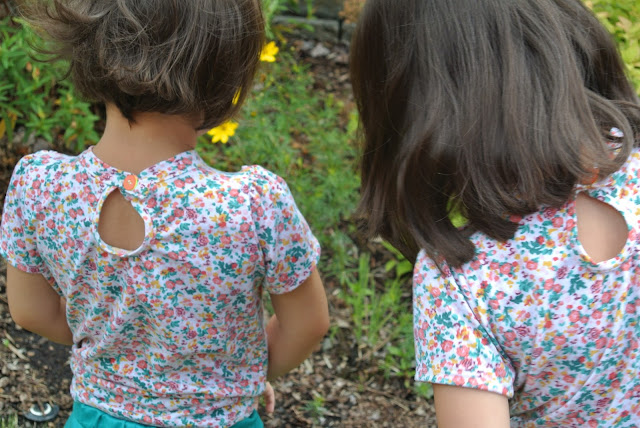 The shorts are from a Ruby Jeans Closet on Etsy called the Simply Sweet Shorts.  It's a really simple basic pair of shorts that have an optional ruffle and a couple of buttons. 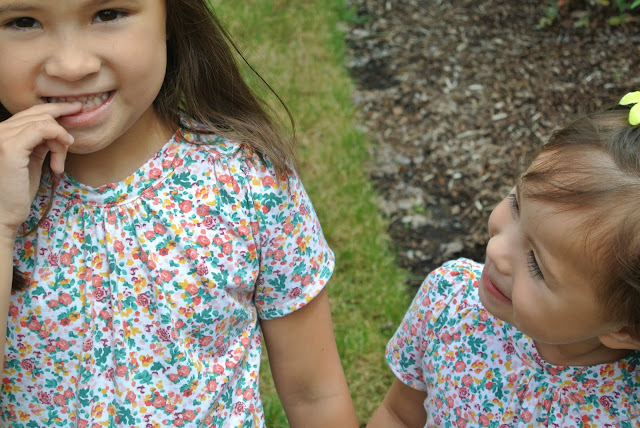 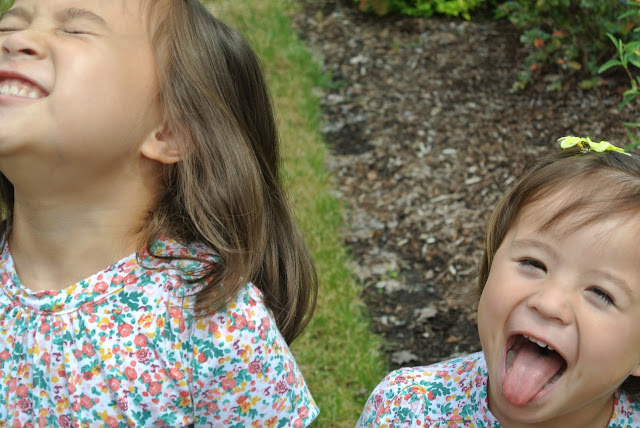 KCW  is coming up next week and both girls will be in dance camp everyday.  So excited to get some sewing time in the daylight hours.
Posted by trinh at 4:01 PM 1 comment: 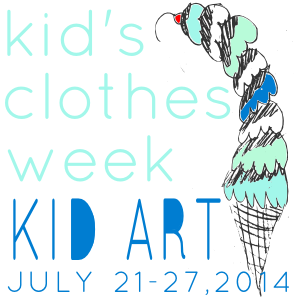